The MCX industrial connector in detail

The connectors corresponding to the MCX series are directly linked to a miniature connector, the male-female coupling of which is carried out by means of a quick snap-on system. Below we explain everything related to the MCX industrial connector in detail, providing an explanation of its components and functionalities.

It is especially used in the field of communications and measurement as its small size makes this connector an extraordinary option for all types of equipment.

As we have pointed out, this type of connector incorporates the quick snap-on system through which the male-female coupling is made. Thus, the design of the central contact and the insulator support is very similar to that of the SMB connector series.

However, there are some differences between the two types of connectors. In the case of the MCX series, the external coupling mechanism has been considerably optimised; a great qualitative leap in design that has reduced space by up to 30% compared to the SMB series of connectors. This is a major milestone in this field, achieved without compromising reliability, trust and security in the least.

The characteristic impedance of these connectors is 50 Ω with effective frequencies of use above 6 GHz. Thus, the MCX industrial connector is widely used in wireless networks and GPS systems, which are widely used today. They can also be used in any communications or measurement equipment, especially those that require small size connectors but have high performance. 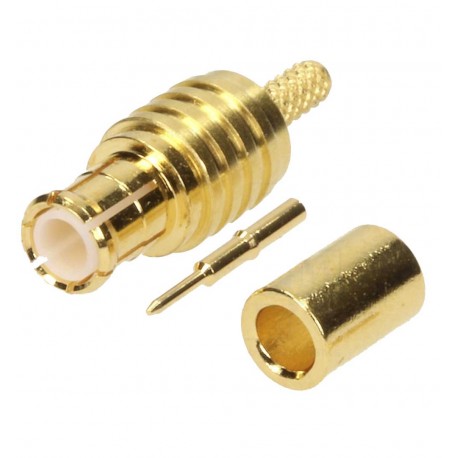 There are a number of MCX coaxial connectors available on the market that are particularly suitable for both standard and special cables; the latter group includes flexible, semi-rigid and rigid cables, among others. In addition, they are available in a wide range of presentation formats: straight, SMD mounting, panel, angled… There are also many options for cable mounting, such as welded versions or cable glands.

Today we live in a world in which everything is changing at a dizzying pace and with giant strides, especially in the industrial sector. Thus, as far as telecommunications and electronics are concerned, the MCX series connectors are one of the best options available today as they have an optimized mechanism that stands out for its small size, while maintaining its robustness and strength.

This is the full explanation of the MCX industrial connector in detail, a miniature connector that offers 50 Ω of characteristic impedance, and can exceed 6 GHz of effective frequency of use; an extraordinary alternative in the field of telecommunications and 21st century technology. For more information about this connector or others do not hesitate to contact us.